The DVD of De ce eu? (English title: Why me?) comes with a detailed and enlightening booklet to aid those who first come across this movie. Consequently, there is no doubt that the film is very well informed on what surrounded the real-life case of Cristian Panait and Alexandru Lele. The former, a young prosecutor in Bucharest, was pressured to initiate the criminal prosecution of the latter, a local prosecutor in Oradea. Lele had ordered the arrest of the son of a local party bigwig, on charges of being involved in a petrol smuggling ring. The political ramifications of the case were immense at the time, in an era that can arguably be identified as the worst for the rule of law in post-communist Romania, especially in relation to the complexity of the criminal/political machinations. 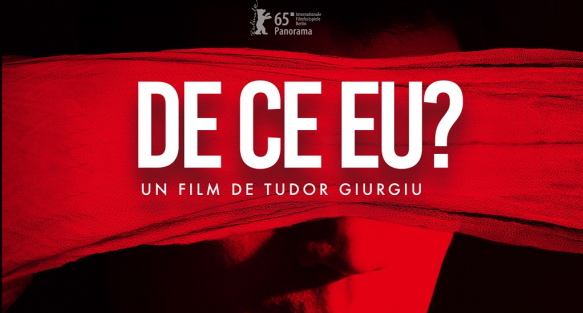 Tudor Giurgiu and Loredana Novak adapted this story into the semi-fictional Why Me?. In doing so, they kept the core themes of corruption, political webs of interest and individual persecution, and molded them to fit a traditional narrative structure. What came out was the tragic story of Panait, here renamed Panduru, who is cornered into losing his mind while passing through cinematic stereotypes of political thrillers, rather than exploring the deeper roots of his anxieties. This leads to the crux of its undoing: creating a believable scenario where Panduru goes from self-confident to self-destructive within a time frame of a couple of weeks.

That is not to say that the movie is without merit. At times, it is a powerful indictment of powerlessness in the face of systemic corruption, as it effectively portrays the bullish hierarchical relationships that arise in certain bureaucracies. But as it focuses on Panduru, it has a hard time delivering an empathetic character – instead, we are served with Emilian Oprea’s stiff and robotic interpretation, which occasionally engages, but never emotes. Moreover, Giurgiu employs several stereotypes and tropes you would expect from a Hollywood screenwriter/director, as lurid sex scenes of no obvious relevance and pointless mistresses spice up some unimaginative camera pans and shots, including the already classic downwards looking spiral staircase, which is complemented here with repeated battery removal procedures from some old school Nokia phones.

Perhaps I am being overly harsh, because it all comes together in a compact, competent, if rather unimaginative manner. But it is unusual to see Romanian films failing to be authentic in dialogue or setting, as what should be 2002 rarely feels farther away than 2015. When it actually does work, like in the repeated use of the utterly condescending and demeaning expression of “boy”, generally employed by superiors in conversation with Panduru, you do feel the weight of the world on his shoulders – right there, in one little gesture. It’s just that the film lacks the fascinating depth that a proper analysis of the facts would have allowed, while its bullishness doesn’t have the expected bite.