I was traveling in Berlin a year ago when I first saw someone reading the eponymous book on which this movie is based. It stuck somewhere, so as my travels brought me back to Berlin and posters were advertising Er ist wieder da (English title: Look Who’s Back), I had to give it a go. The movie is being released this week on DVD/Blu-ray, so it’s as good a time as any to revisit my thoughts of the day. 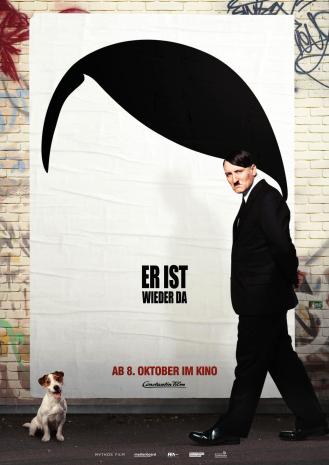 The challenge, as with previous comedic movies themed around Hitler or the Nazi regime, is treading the line of reasonable taste and still being challenging enough to gain some relevance. One of the best known spoofs of the times, The Producers, uses it as a pivot to tell an engaging story about several memorable characters, so that works well. But here, there’s little to pivot from, as Hitler, in realistic attire and demeanor, narrates his experience of present day Germany. So the twist, in part, is to make it a mockumentary in the spirit of Borat (2006), see how people react to Hitler walking the streets and delivering his calculated critiques of the political system, the media – life in general. When it’s not doing this, the film provides a decent dose of slapstick and irony in what amounts to a buddy comedy, while alternating between scripted and non-scripted parts. Distinguishing one from the other is not really the key to enjoyment; the key lies in accepting this faithful representation of Hitler as a grotesquely humorous caricature of the symbolic power he holds over modern history in its most extreme moments. It was a bit harder than I thought it would be at the beginning, but one settles in well, after a while.

Narratively, not much really happens, other than the fact that the protagonist pops up in Berlin and gets acquainted to what the world is like nowadays. To help him in this, a few support characters act as guides; none believe him to be “the real thing”, but rather a comedian or a satirist. So, in a sense, it’s not really a very ambitious film, because the degree to which it engages with the moral dimension of the situation is limited. But it is ambitious in that it tries to keep a straight face even through the more ghastly, touch-and-go moments one would relate to a Hitler movie. It is at its best when it does this, but then the occasional piece of slapstick hits you in the face are you’re back into the reality of a mildly amusing film that people have only heard of because it is polemic.

An important part in the whole thing coming together reasonably well is thanks to Oliver Masucci, who offers a strong performance to keep the “pots” in balance. Perhaps one could critique this in particular: the implication is that any piece of fiction told in the first person will make the viewer empathize with the character, hence humanizing the historical figure. But the historical figure itself is merely a representation of the man and Er ist wieder da tries to contextualize this – make away with what you know and imagine this were pre-1933. As mentioned, it doesn’t go very deep with it and it would be quite problematic to do so. It’s just a thought experiment which concludes in a slightly open and ambiguous fashion. Perhaps fittingly, with the high profile tolerance we’re seeing now to a certain flavour of hate speech.

To address the real questions though: did I laugh? Yes, I did. Did I enjoy it? Yes, I did. The film managed to create an amusing environment which plays off the character of Hitler, without making it the other way around (all the time). As for the big picture, I might not agree that the world is, collectively, where it was seventy years ago, in spite of the troubles we are currently facing. Or that we would make the same mistakes all over again. But that’s another story of me visiting Berlin.

Quotes of the Gram