It was fitting that on watching this film, I was almost alone in the cinema, because isolation and solitude are powerful themes throughout Fúsi (English title: Virgin Mountain). So when you’re out by yourself, in the middle of the day, to watch an obscure Icelandic movie showing at an archaic cinema that now uses a projector rather suited for private use, than public screenings, it all kind of falls into place and reinforces the emotional investment in the whole experience. 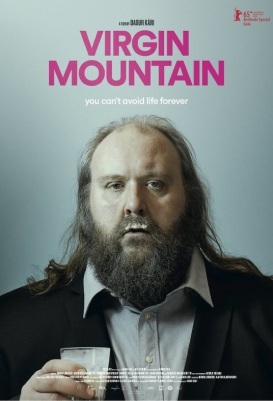 Fúsi, a 43 year old man-child, but without the usual derogatory connotations of the term, is a tinkerer who lives with his mother, reenacts WW2 battles with his neighbour and works at a hapless job, where he is constantly bullied. Yet, what looks like a bleak and joyless existence, washes over Fúsi like a warm shower on a winter’s day. His outlook on life is inhabited by a neutral positivity informed mostly through how naive and passive Fúsi seems most of the time. And all this is tested once he meets a woman who appears to take an interest in him, enabling him to be the nurturer he is at heart.

This story really knows how to hit a nerve for anyone who has ever felt alone, or love-stricken or stranded. It is a vicious portrayal of the world, which is only redeeming because Fúsi is the kind of character that takes it all in his stride. Otherwise, it gently treads the line of tragedy, but never crosses it. And surely, Fúsi is an idealized altruist with autistic tendencies, but he’s still someone you can identify with, because you recognize the gestures, the emotions and the triggers within and around him.

However, the film does tend to be stereotypically simplistic in its bleakness. Whether it is the abuse Fúsi faces, his run in with the law, the relationship with his mother, these occasionally serve nothing more than to amplify traits in the character, respectively “the world”, which are all too apparent to begin with. Not to mention that his romantic conception of what is acceptable really pushes the suspension of disbelief to places it should never be pushed. Yet, it is in the romance that the film manages to stay true to itself and believable, hyperbolic gestures aside. Because, hey, we’ve all been there and sometimes it does play out in your mind the way it all unfolds here. Or thereabouts.

So there it is, an Icelandic experience of philosophical proportions, that is quite certain to leave you ruminating at its conclusion. And empathizing, which is always a good muscle to engage.