I’ll admit from the off that I was skeptical regarding this documentary ever since I first heard it was in production. Having read the book, I felt that what made it enjoyable could not really be transposed onto film. Economics, being such a science of numbers, even in its freakonomic form, does not really lend itself to being narrated to death. 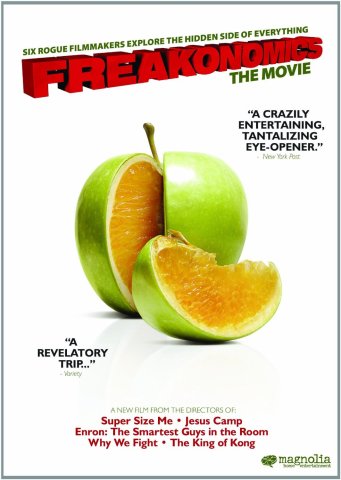 Going beyond this limitation, I reckon the film could have still been better, had it found a unity of tone. Unfortunately, as several different teams were involved with making each of the four chapters, the final experience is heavily fragmented and unlike the book, which kept its pacing throughout, the film is all over the place.

The first part looks at whether there is some sort of correlation between a person’s first name and the path one happens upon in life. A potentially amusing segment, it proves to be in search of a comic sense it never arrives at and the examples taken from the book appear wholly unrealistic and not fully integrated.

The second part is quite dark and brings forth a sort of investigation into the Sumo world and allegations of match-rigging. Contextualized in the sacrosanct culture that defines the sport, this exploration of truth, justice and fair-play toys around with big words and complex issues, its reach ultimately exceeding its grasp.

The third part references dear old Romania and our beloved dictator’s policy of ruling abortions illegal – a subject matter dealt with artistically in the well-known 4 Months, 3 Weeks, 2 Days. I’m not quite sure the parallel proves a point, because it tries to show how the opposite policy, legalizing abortion in the US following Roe v Wade, caused a sudden, steep reduction in crime in the early nineties. Ironically enough, the generation Ceausescu forcibly birthed, so to say, caused his downfall. Yet, I think this segment points out an interesting observation, even if one could get distracted by the overly dramatic narration.

The last part is an on-film experiment about trying to find an incentive to make kids get better grades in high-school by offering financial rewards. Unfortunately, the set-up lacks any authentic feel and implicitly does not help support the case that the authors tried to convey in the book.

So overall it would seem that almost all segments have at least one fundamental issue that they don’t tackle very well. At times the film livens due to the interesting nature of the facts being presented, but on the whole it’s still shy of a successful venture. Even while reading the book I felt that the novelty seeped out of it before I had reached its end and this feeling was only exacerbated here.

I don’t think this is the place to debate the correctness of the research Levitt and Dubner have done or their conclusions, because the film certainly does not offer a strong basis to work on. The book has a scientific feel to it, conferring at least a sense of objectivity and, more importantly, finding the levity to show that it does not assume to offer absolute answers. The documentary, on the other hand, loses sight of this and never manages to find its proper balance.