God, the turn of the millennium was such an awesome time for mainstream movies. One of the guys who has since become the Hollywood auteur is Alejandro G. Inarritu. Two Academy Awards for best director in consecutive years? Quite the feat. 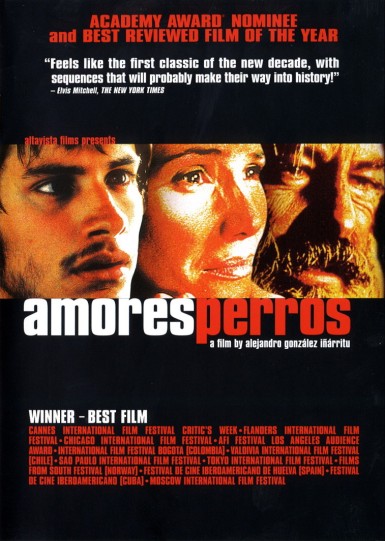 But to me, Inarritu has been insanely hit and miss. Not to say that he makes unwatchable movies, just that they tend to vary to such a wide degree that there’s no guarantees in which mold they’ll fit. The first I saw was 21 Grams (2002), which I recall as being pretentious and melodramatic. Not to mention that it starred Sean Penn, who seems to embody all the worldliness that I dislike in actors/artists – the El Chapo interview representing the crowning glory of his self-inflated irrelevance.

Alright, that’s harsh. I just don’t like the guy, let’s just move along. After 21 Grams I must have seen Babel, because it made me give up on the Mexican director. More of the same with the same high profile actors in their desperate search for their artistic integrity. So imagine my surprise when I finally watched the movie that brought Inarritu into the spotlight, Amores perros. And then the exceptional Birdman (2014), before descending into pretentiousness once more with The Revenant (2015) – another combo with an actor I don’t particularly care for. Biutiful (2010) I have yet to watch.

Bottom line is, there’s no real box for the guy. His bad good movies are so frustrating because you have a sense of the kind of depth and vision he can conjure up at his best. And Amores perros is the perfect example. This review, which I wrote in 2007, retreads some of the things I’ve discussed, not really focusing on why I loved the movie – but at least it’s so prescient (said the non-pretentious one). Enjoy!

I was talking with someone a while ago, saying how Babel is a bland film which offers far too little for its length beyond schematic critique to a rather obvious conception of contemporary flaws. How 21 Grams overwhelmed me as too depressive for its own sake and had its own air of artificiality. I mean, that’s an obvious problem you might get when trying to string together stories and embody them in an integral whole. The someone I mentioned above was quite dismissive of my thoughts, claiming the genius of Inarritu was indubitable in both films, and asked me the most obvious question of all: “Why do yo go to see Inarritu films if you dislike them so?”. My answer was inevitably superficial, for I said “Because I like to believe”.

It’s funny in a way, this feeling of going back int time; he remains absolutely the same, his work is just as loaded with bold, significant statements, but only in Amores perros have I encountered the authenticity I crave. Maybe it’s got something to do with faces, with the fact that his last two movies employ famous faces to which I cannot relate the gritty realism which Inarritu tries to convey. Not that I’m saying Brad Pitt, Cate Blanchett, Sean Penn or Benicio Del Toro are bad actors; it’s just that their well known.

Amores perros is a gritty, realistic and authentic film which dissects the sour, bi-polar reality of contemporary society. Segmented as all of Inarritu’s films in several stories, it introduces each of them in similar style with the oh-so-beautifully-romanticized Hable Con Ella (2002), with a black screen bolstering two character names in large typeface. The three stories are vaguely interrelated, tangentially. They portray the fate of an impoverished, lower class working family in Mexico, a love story between a model and a magazine editor and the in-between tale starring a homeless assassin, ex-teacher, ex-rebel, ex-convict. Inarritu’s social conviction of inequity and unfair distribution are quite obvious, but his view does not infer the well-being of the upper class. The dogs, central motive of the film in some regards, are used as a means to gain wealth in the ghettos of Mexico, while in the central districts they obsessively plague a distinctly alienated and paranoid layer of society.

Inarritu’s films are so pedantic in matters of style and structure, that they offer great ability of insight. I do not necessarily enjoy this, as it goes into an awkward level of schematic realism which I despise. While it is bearable in Amores perros, it is not in his second and third ventures. The Mexican director also has a rather morbid proclivity towards worst case scenarios, taking the already dim reality portrayed and bending it to extreme levels. Again, while I managed to live with it in Amores perros, I could not in Babel and 21 Grams. Straining reality too much does not make reality more real – on the contrary.

There exist therefore several reasons why I shy away from Innaritu’s approach to film-making. I like to avoid the overwhelming and insurmountable abstractions of class. Perhaps that’s white privilege talking,  but I’m not trying to deny the existence of social structures and challenges, just pointing out that their artistic representation treads a fine line between bleak and unbearably bleak – for its own sake and shock value, more so than any insightful commentary. Amores perros gets the balance right and I recommend it wholeheartedly to all cynics – for I was one myself.

P.S. I must have abused Inarritu’s name a dozen times in the original review, spelling it with two n’s and one r. At least I was consistent though.