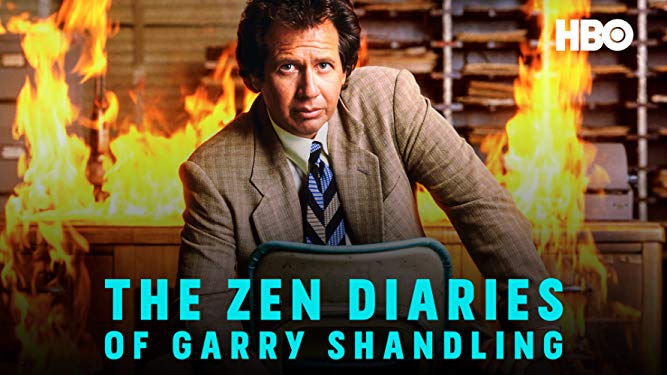 I knew little of Garry Shandling before watching Judd Apatow’s documentary, a four + hour tribute that reveals itself as an exploration of what drives us to do more than just (the Shakespearian) be. I hadn’t heard of “It’s the Garry Shandling Show”, nor his parodic work on “The Larry Sanders Show”, nor was I at all aware of his influence on a whole generation of comedians, including Jim Carrey, Jerry Seinfeld or Apatow himself. All I really had was the lukewarm “What Planet Are You From”, a rather unsuccessful collaboration between Shandling and Mike Nichols.

While a master at his art, that is ultimately not what makes The Zen Diaries absolutely watch-worthy. This isn’t just bits of stand-up patched together. Apatow somehow created a delicately intimate portrait of a man he admired immensely, a feeling that oozes throughout, a sprawling piece of work that could have done with more structure, but ultimately replicates the complexities of its subject. Of almost any person that you never really got to know. Shandling is the proverbial onion, layers upon layers of self, uncovered with a deft touch, that captures his brilliance, his passion, his eccentricities, his…desperately human imperfections.

I’m not sure I’ve ever liked the idea of listening to people who describe their search for inner peace, who make so much room for this search in their lives. To everyone his own, of course, because in some sense, I guess this blog is my very own straggling experience of it. But in The Zen Diaries, the title really delivers, you get a portrait of someone as if reading their most intimate thoughts. Just a guy trying to put some order into his life, someone who literally learned how to be funny, for whom it didn’t all come easily. There’s a lot of work that goes into making something seem easy, but there will always be Rafael Nadals to Roger Federers, people who just make you believe that there is more than one path to excellence.

Apatow’s movie, while as imperfect as its subject, achieves what it set out to do and even goes beyond that, showing the making and breaking of one of the most influential people in American comedy. At the same time, it feels like it could be almost anyone you know. A rare and timely example of becoming (or trying to become), as opposed to simply cultivating. 9/10