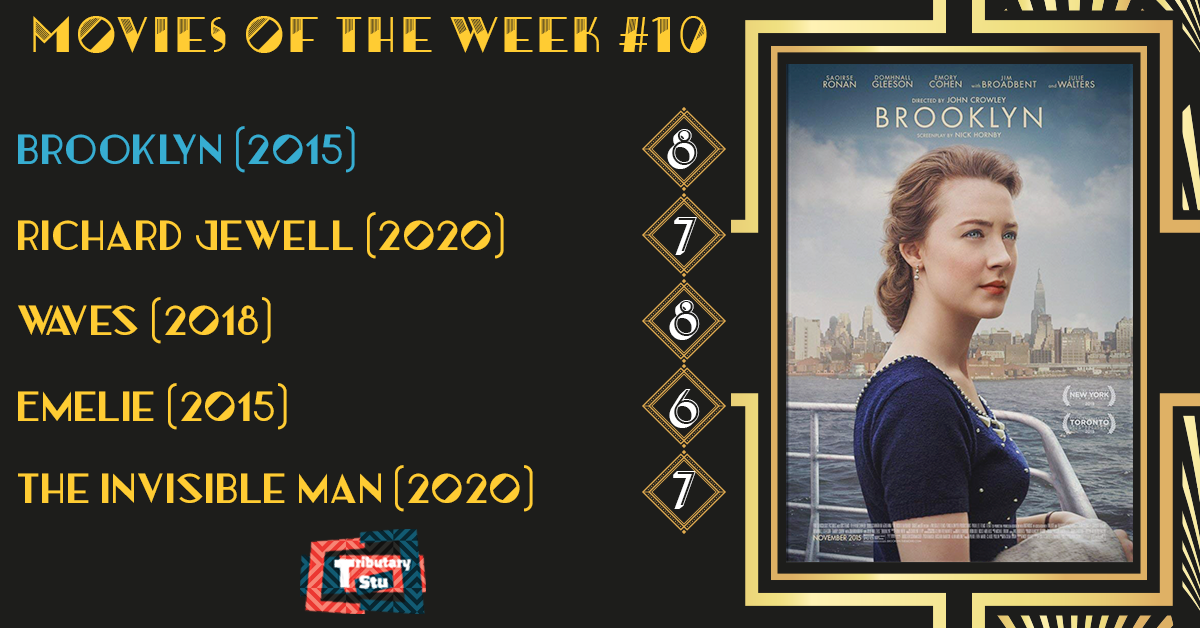 Brooklyn (2015): One of my overdue movies from recent years (Carol is its 2015 twin), John Crowley’s period piece is a predictable, yet emotional coming-of-age-tale. Led by Hollywood’s newest sweetheart, Saoirse Ronan, it features a warm-hearted love story mixed with familial tragedy and its heavy anchors. Brooklyn peddles the idea of choice, in matters of life and the heart, and it does so skillfully, finding the nuances where it matters most, outlining the sacrifices as well as the sense of empowerment that comes with them. 8/10

Richard Jewell (2020): The strong cast carries this underdog story, that often lacks the edge to stand out. Paul Walter Hauser does well to make Jewell a likable protagonist, in this cautionary tale on relying too much on first impressions and pigeonholing. I was too young to remember the Centennial Park bombing during the Atlanta Olympics in 1996, but it’s easy to feel for Jewell, who is convicted in the media merely for fitting the profile oh-so-well. Unfortunately, it all feels rote at times, with underwhelming antagonists, which is why Clint Eastwood’s latest isn’t as exciting as it could have been. 7/10

Waves (2018): As far as dramas go, Waves is impressive. The story of a suburban American family, whose universe starts unraveling, might feel familiar, but that doesn’t make it any less convincing. Thankfully, it’s not as emotionally daunting a movie as Trey Edward Shults’s seminal effort (Krisha), and the manner in which it finds both a narrative, and an emotional balance is clever and well executed. Its humanity shines through, a great thing to see in times such as these. 8/10

Emelie (2015): Maybe The Babysitter (2017) is sexier, but Emelie has more menace to it (if less blood). The despair of its titular character is palpable and it almost makes sense, with almost being the keyword here. If it had been lass camp and more nuanced, Emelie could have made a mark on this horror niche. As it stands, it’s an alright movie for the enthusiasts, which lacks the novelty to make it a fun(ner) ride. A good performance from Sarah Bolger, though. 6/10

The Invisible Man (2020): Hollow Man is a sort of guilty pleasure of mine and I liked the 1933 adaptation of H.G. Wells’s story, so you could say I was excited about this newest version, directed by Leigh Whannel (Upgrade, Insidious: Chapter 3). It’s a very solid re-imagining, rooted by the excellent performance of Elisabeth Moss. More importantly, it works well to create a visceral take on what it might feel like to be in an abusive relationship – intense stuff, really. The downside comes in the less than inspired ending and the fact that the movie asks of you to suspend your disbelief and not to ponder technicalities, which is why I’ve also tuned my rating accordingly. If you don’t mind this, though, you’re in for a helluva ride. 7/10