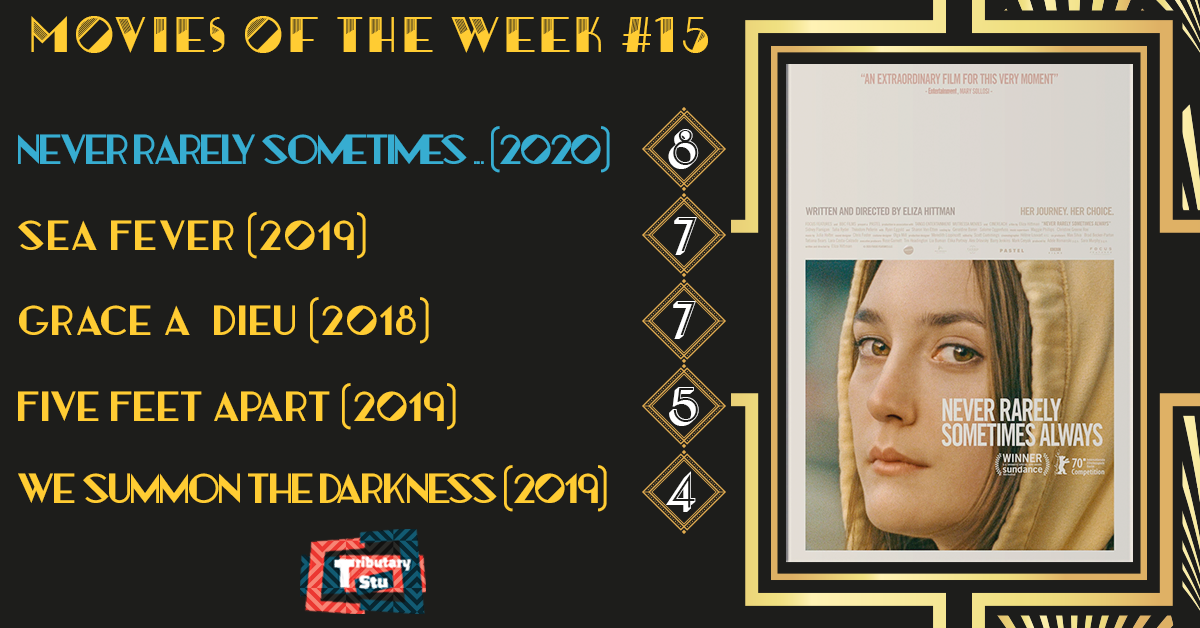 Never Rarely Sometimes Always (2020): It’s difficult for any movie to break new ground re: teenage pregnancies and abortions. That being said, NRSA finds the perfect pacing to let the pain and sorrow of its characters seep out, avoiding melodramatic or dogmatic pitfalls. And, of course, the movie isn’t as much about the pregnancy, as it is about the environmental factors and sexual…pressures that the two girls featured here (and many more like them) have to endure, manage, cope with – as if nothing’s happened. Interestingly, my mother commented that this may be painful to watch in a present day context, but the kind of risk women were exposed to in communist Romania (see Four Months, Three Weeks, Two Days) doesn’t bare comparison. Indeed, our perception is steeped in contemporaneity. 8/10

Sea Fever (2019): Back at my monster-feature proclivities, Naesa Hardmina’s movie falls a bit short in the end due to a lack of focus. Its slow pace will also be trying for some, but it wasn’t a problem for me, as I am partial myself to its Alien-esque rhythm. Out of the several themes the movie wants to tackle, it strikes gold given the health crisis we’re going through, posing questions about isolation and quarantine to its untrusting characters. Punctuating its course with just the right amount of gore and drama, I declare myself quite content with Sea Fever. 7/10

Grâce à Dieu (2018): Expecting a movie that was more about the lives of people who had suffered sexual abuse from clergymen and not about the fight to make the church take a stand on said abuse, Grace a Dieu was at time tedious and fragmented. In a way that was the point, because we get to meet people from very different walks of life, brought together by this terrible event. Based on a true story, the whole thing is too focused on indictments, when those are never really the point at this time and place in cinematic history. It still works well enough, thanks to its flurry of characters, but just isn’t as memorable as I’d hoped from director Francois Ozon. 7/10

Five Feet Apart (2019): There wasn’t much to like about this teen tragy-drama about kids with Cystic Fibrosis, enduring their affliction an the hospital equivalent of a five star hotel. Or let’s put it another way, for the most part it was an alright ride, soppy and predictable, but well executed, before hitting the teen angst moment towards its end, which tipped it towards the obnoxious. Beyond that, beautiful mid-to-late-twenty-somethings playing suffering teens seems popular right now – hey, it’s always been popular – if only it were interesting as well. 5/10

We Summon the Darkness (2019): I wanted to like this ritualistic thriller, but it was too much to demand of me in the end. Outline: “Three girls embark on a road trip to a heavy-metal show, where they bond with three dudes and head off to one of the girls’ country home for an after-party.” It’s hard to find the words to put some thematic meat around that dire plot, but think of cultism playing dress-up as satanism, add some twists and violence, and you’ve got…something that feels a lot like a rehash. 4/10