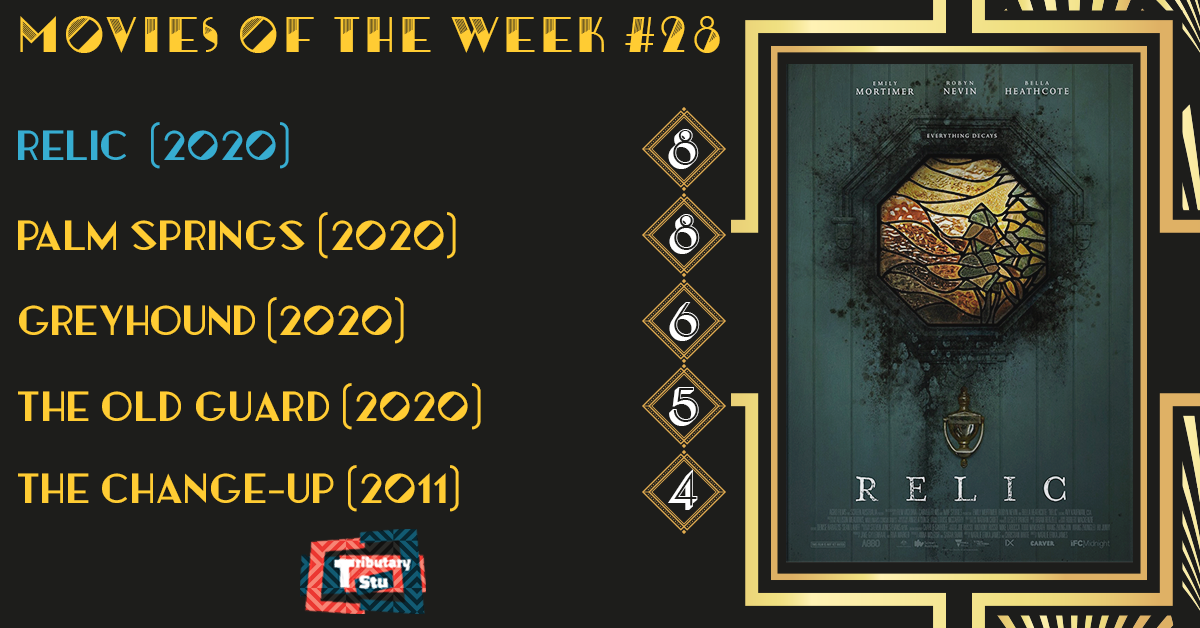 Relic (2020): Whether you are into horror movies or not, Relic is bound to creep you out and send you into a spiral of dark thoughts. Natalia Erika James’ movie, wherein a mother and daughter go to check onto grandma, speaks uncomfortable volumes about how the degradation (not to call it “aging”) of our loved ones is one of the most difficult realizations that we will have to make as adults. While a bit of a slow burner, low on scares, but consistent in uncomfortable hair-raising moments, I found it to be rewarding and challenging in equal measure, with a satisfyingly vague and ponderous conclusion. Because it’s hard not to compare, Relic hit closer to home for me than Hereditary (2018). 8/10

Palm Springs (2020): Is this one of the most enjoyable feel-good movies of the decade? And I mean the one that’s ending, not the one that’s beginning. It might well be, because in Palm Springs the pieces fall into place perfectly, thanks to the excellent cast, led by Andy Samberg and Cristin Milioti. The set-up gives them a helping hand, as Nyles and Sarah find themselves in “one of those infinite time loop situations”, rinse-repeating the wedding day of Sarah’s sister. Fifty first weddings, kinda? What’s great is that the movie doesn’t waste too much time playing around with the variations, we’re just plunged into the story after almost all the scenarios have been played out and the remaining challenge is how to survive the utterly mundane fate of reliving the same day over and over again. I.e. married life, where the pain is real, but it keeps rebooting every dawn regardless. Finding meaning is more important than all the formalism and doing it alone is fine, as is doing it alongside someone else. Or something like that. 8/10

Greyhound (2020): Is this the niche for Tom Hanks now, commander of aerial, amphibian and terrestrial vehicles? Regardless, Greyhound feels like a movie from the early 00s, solid to look at with some interesting aspects of marine warfare, but not much else. I love me some U-Boats and the fierce battle for survival is at times fascinating to behold, but more so technically, than narratively. Which makes this a movie…behind of its time, as far as I’m concerned. 6/10

The Old Guard (2020): I was unpleasantly surprised by how poorly written and tonelessly directed this comic book adaptation was. In spite of an excellent cast, lead by Charlize Theron, The Old Guard takes an interesting idea and grinds it into irrelevance. The concept, a group of immortal warriors fighting for what they believe and trying to reconcile with their eternal nature, held promise, but character motivations were less than convincing throughout. While the fights might jolt the adrenaline, it all feels predictable and unengaging, with director Gina Prince-Bythewood a poor fit for this genre piece. 5/10

The Change-Up (2011): For whatever reason, I forgot I had seen this little turd of a movie at some point closer to its release. Maybe it was self-protection. Regardless, watching this Freaky Friday remake with guys is as unfunny as it was the first time around. In spite of a great cast, with the likes of Jason Bateman, Ryand Reynolds, Leslie Mann, Olivia Wilde or Alan Arkin, director David Dobkin (more recently of the Eurovision movie) can’t find a way to elevate the lackluster script. The movie is tame when it should be bold, gross when it should be funny, and doesn’t have any sort of ambition to ruffle the feathers of its characters. At least there were a few funny one-liners. 4/10