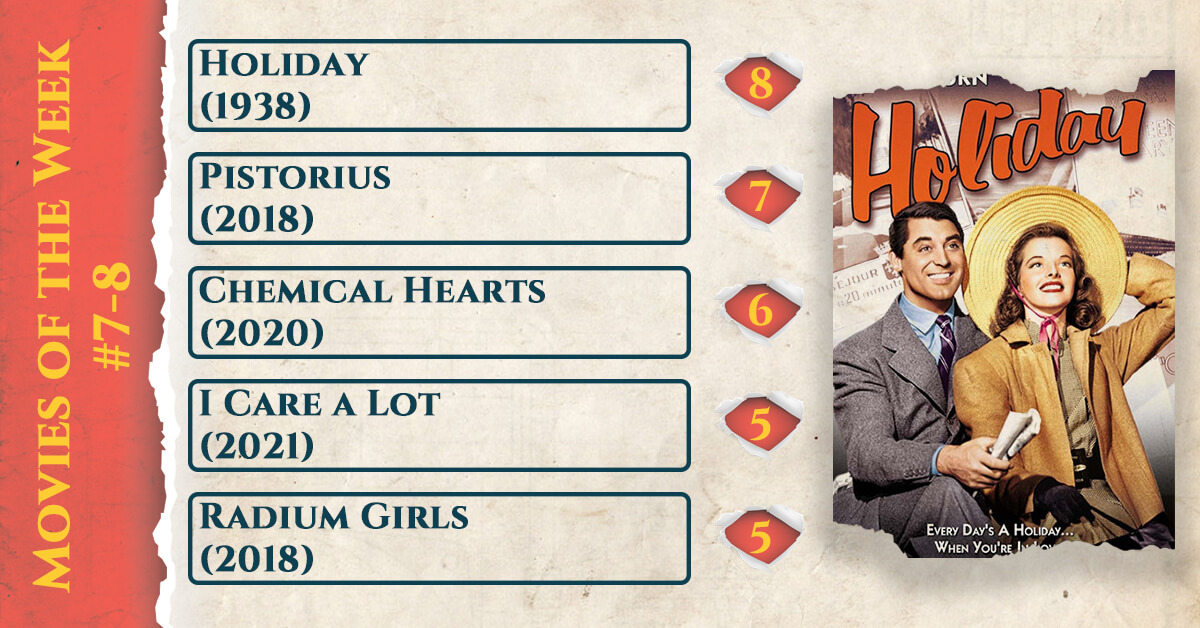 Holiday (1938): It’s good to see that even going back to the 1930s, there were people thinking of ways to retire in their 30s – if only they’d had some crypto to speculate in the day! Starring Cary Grant and Katharine Hepburn, George Cukor’s romance shows its age at time, both thematically and in how the matter of a ten-day-meet-to-engagement-to-wedding is treated. That being said, the strong cast and the witty writing elevate Holiday to a perfectly enjoyable tale of instant chemistry, which ultimately works particularly because of the perceived frivolity of the obscenely rich when it comes to matters of the heart. 8/10

Pistorius (2018): Hearing about the case of paralympic icon Oscar Pistorius all the way back in 2013 felt surreal at the time. Watching this four hour documentary occasionally rose up to my expectations, but the whole affair is mired in sensationalism and melodrama. Naturally, making sense of what really happened is not the goal of Pistorius, although it leans firmly towards the athlete’s cause. Then again, it also goes to show (as everything else, nowadays) how easily the narrative can shape our interpretation of reality depending on a particular worldview. So while it isn’t a truly powerful piece of filmmaking, it is fascinating nonetheless. Unfortunately, having been released in 2018, the docu misses out on how the initial lenient sentence switched to a much harsher one, most certainly a matter of politics more than justice. So many forces at play here, that it feels like Pistorius is a bit of a missed opportunity. 7/10

Chemical Hearts (2020): CH is a romantic teen movie made to be successful, starring Lili Reinhart and Austin Abrams, actors who made it reasonably big in popular teen TV show. They make a cute little couple, wearing their teenage angst and suffering on their sleeves – if more suffering than usual. However, this story is never particularly exciting, so unless you connect to the melancholy vibes, enjoying Richard Tanne’s movie will prove hard. 6/10

I Care a Lot (2021): Netflix’s newest power-woman serving is two movies in one. The first half of ICaL provides an intriguing, if rather horrific set-up, social-wise, as Marla (Rosamund Pikes) grifts away at hapless old people, abusing her position as court appointed legal guardian. Things take a turn when she targets Jennifer Peterson (Dianne Wiest), and soon after the movie goes off the rails, morphing into a brutal femme-fatale-fest that has no tangent with reality. Of course, it’s a movie, it doesn’t need to have one, but the unlikable characters make for dour viewing, no matter what meta-capitalistic commentary ICaL is making. So in spite of some good performances from all involved, including Peter Dinklage, I found myself distinctly irked by all of the twists and turns we are taken on and had very limited fun with it. 5/10

Radium Girls (2018): A hair-raising true story of how early industrial work caused the death of women in the 1920s due to radiation exposure, this movie occasionally feels captivating, but ultimately proves a disappointing piece of film making. The unusual editing, crossing archival footage with faux-archival footage with the actual narrative actually works, but the story is told clumsily, veering into so-bad-it’s-good territory by the end – due, mainly, to a poorly executed courtroom drama. 5/10