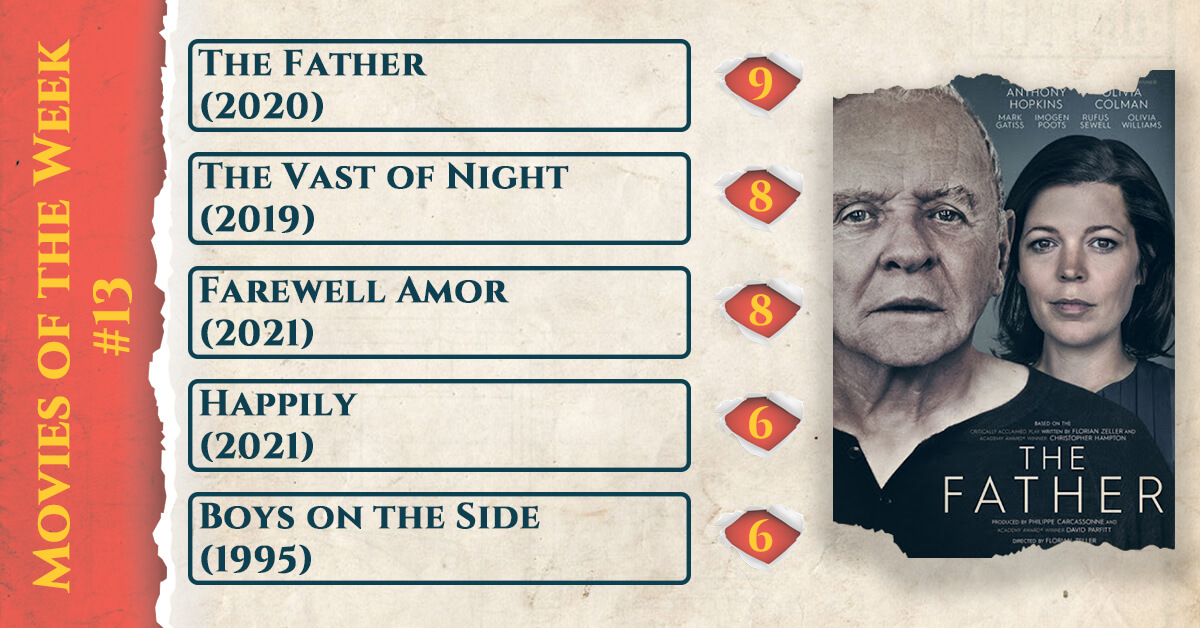 This week’s automated podcast is available on Anchor.

The Father (2020): Dementia (particularly Alzheimer) has been a theme in many successful movies during the last decade or so, clearly a significant concern for our ever-aging Western society. These movies are never easy to watch. What sets The Father a apart is its nonlinear storytelling and the phenomenal performance by Anthony Hopkins. First time director Florian Zeller produced a riveting piece of filmmaking, an impressive adaptation of his own play, taut and engaging, in spite of some wobbles in the last third. It’s rare to come across a play adaptation that masks its origin so well. And to ignore the emotional resonance, the very particular and true to life expressions of suffering within its characters, would be an injustice to one of the best movies of the year. 9

The Vast of Night (2019): A Twilight Zone-y movie, shot with a lot of flair, TVoN is a lot of things at the same time. Perhaps not altogether thrilling per se, given you know where it’s going and the story itself won’t rock you off your couch, the manner in which it frames the mystery is truly admirable. From hammering you with incessant dialogue to ponderous, minutes-long scenes of technicalities and radio-show deliveries, it swerves and pivots elegantly. Everett and Fay are a couple of unique enough characters to stand out, but what I found…haunting, really, are Fay’s relentless sprints that would put even Tom Cruise to shame. A different kind of movie, for sure, but if you’re up for an experience, you’re going to get it. 8

Farewell Amor (2021): A sober movie about an Angolan family reuniting in the United States more than a decade after their separation, Farewell Amor provides a multitude of perspectives on the struggles to adapt a new reality. It’s hard not to empathize with the characters, a diverse lot generationally and culturally, whose fate feels antithetic to the entitlement that’s currently running our world ragged. While not revolutionary, I found the movie to be the quiet contemplation we need to watch more of, thanks in no small part to Ekwa Msangi’s work as writer/director. 8

Happily (2021): Writing of Twilight-Zone-y stuff, Happily isn’t far off either. Starring some beautiful people, like Kerry Bishé and Joel McHale, it tries to navigate the fertile terrain of a perfect marriage, with lots of perfect sex and perfect compromising. Does it succeed? Well, in part it does, if you are willing to embrace the otherworldliness and tolerate some less than sensible moments. It lives up to the dark comedy label, looks gorgeous all around, and a bit like Perfetti sconosciuti, cuts through the hypocrisy of perfect relationships. Unfortunately, there are times where the movie feels rudderless, too opaque, and I wasn’t particularly taken with its conclusion either. All in all, though, I enjoyed it just enough. 6

Boys on the Side (1995): BotS is a movie that could occasionally fool you into believing it is a present-day story, given how central themes of LGBTQ and female empowerment are. There are some distinctly jarring moments in it though, which peg it as a product of the 90s, particularly in its shock and awe approach to an inane bit of courtroom drama. Beyond these things, the story of friendship and shared adventure between Jane, Robin and Holly (Whoopi Goldberg, Mary Louise Parker, Drew Barrymore) is reasonably well sketched out, but never feels personal enough to matter. An unexpected AIDS subplot, presumably riding the wave of Philadelphia (1993), is supposed to offer the dramatic backdrop, but I found it to be artificial. All in all, not a terrible movie, but not something to write home about either. 6