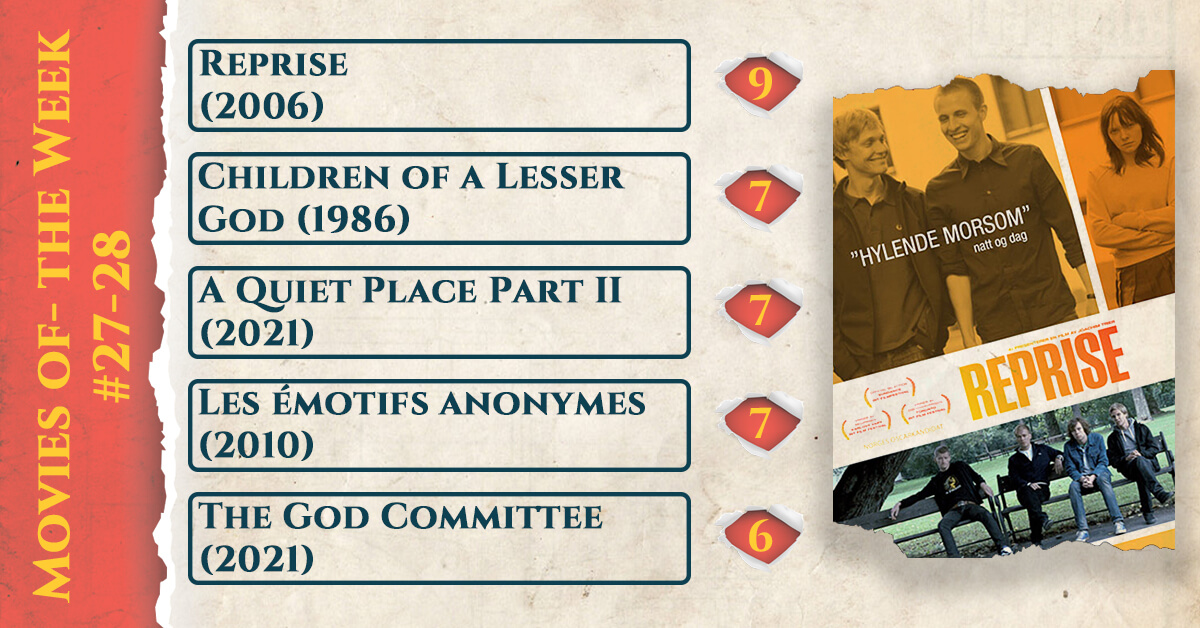 Reprise (2006): I loved Joachim Trier’s movie when I first saw it soon after its release, a perfect tale of dreams, ambition, friendship, romance, youth that rang so true at the time. Rewatching it the other day (a reprise, if you will), a lot of the things I loved were still there, as Erik, Philip and co. are in a place in their lives where their beliefs, cultured and arrogant, come up against reality for the first time. I related to their passion and their struggle, having an inclination towards writing myself, and being a master at idealizing the past (this last part hasn’t really changed). It probably helped that I am a guy, as the movie doesn’t do much with its female characters, which is so un-modern. Ultimately every story hits harder at one point or another in the viewer’s life – both his actual life and his cinematic one – and there’s always a rawness in a debut feature as ambitious as Reprise. This is one of those ‘good’ imperfections you sometimes read about. Trier has since proved his then undefined talent, with his latest movie a hit at this year’s Cannes festival. As for Reprise, it’s the kind of definitive experience you should have in your 20s, but it resounds beyond. 9

Children of a Lesser God (1986): A movie distinguished with an Academy Award for best actress going to Marlee Maitlin, the first and only deaf performer to have won the accolade, CoaLG is not as enlightening as it could have been, but it proves sensible and romantic enough. Co-star William Hurt is equally engaging, yet the movie falters in its attempt to verbally translate sign language to the audience, while the relationship of our leads, very much teacher-student-y, walks a fine line of modern acceptability. 7

A Quiet Place Part II (2020): As far as sequels go, AQPII is a good one – if you like your sequels in the „more of the same” variety. If anything, the way the movie works is a testament as to how good the first one was, that it can sustain another ninety minutes with the same material. It helps that bonding with Cillian Murphy’s character comes easily, the familiar type that’s all down on himself, but fundamentally good, missing a purpose. 7

Les émotifs anonymes (2010): Perfectly endearing, „Romantics Anonymous” is a movie about anxiety ridden people who overcome their fears and manage to connect. It’s a cheap gist, but the execution is pleasing, thanks in particular to Benoît Poelvoorde and Isabelle Carré. It helps that in spite of the exaggerated nature of their behaviours, the script is sensitive enough to keep our leads “alive” as human beings, not just relegate them to “characters with frills”. It might tickle you the wrong way, but the movie feels simple and pure enough to be a likable treat. 7

The God Committee (2021): Offering a view into the complicated state of affairs re: organ donations, TGC is as often pompous as it is surprisingly sharp. With a solid cast, led by Kelsey Grammer and Julia Stiles, Austin Stark’s adaptation of Mark St. Germain’s play is…a meandering piece of work. A past-present gimmick is meant to generate suspense, but rarely does, with the movie at its best when it keeps its characters talking – as expected. With more depth, perhaps a lil’ Sorkin treatment, it could have been a solid recommendation, but as it stands, it’s more of a curiosity. 6