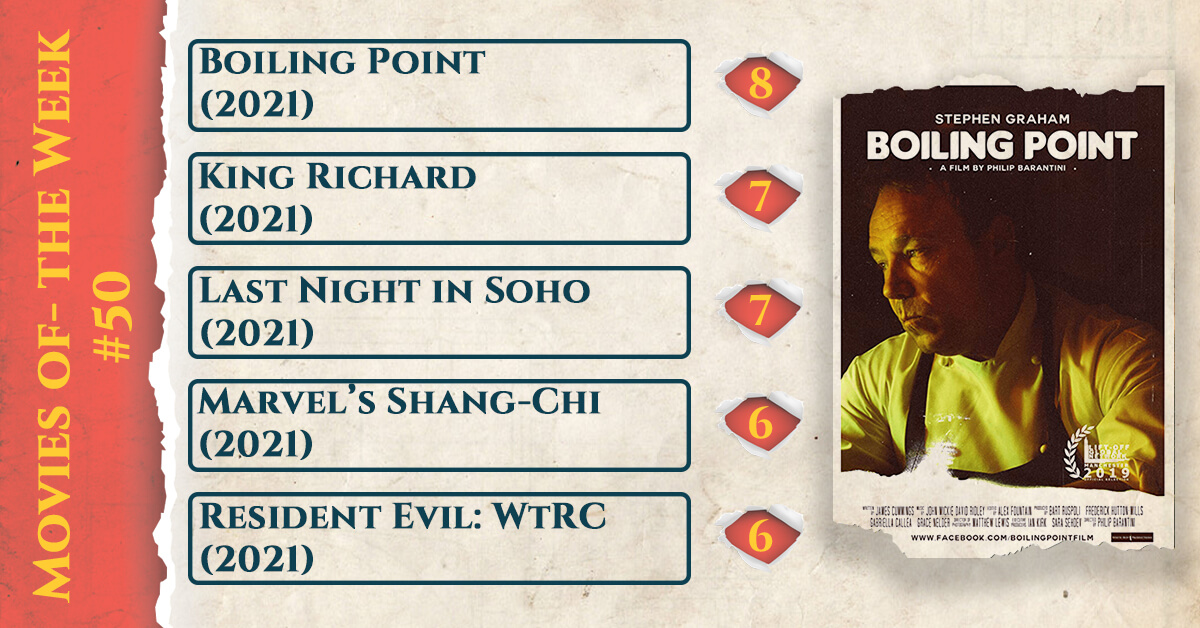 Boiling Point (2021): Movies set in kitchens are…tight! But also exciting, dynamic and quite depressing, given the intensity so dutifully portrayed in each and every restaurant-based-story. Boiling Point conjures a world inhabited by characters that feel mostly real and genuinely interesting, set against all sorts of time-sensitive challenges. What I enjoyed most is that the story establishes there’s a world outside this microcosm and there are things there which create subtle ripples up to the point these, well, boil over. What I enjoyed less is the dramatic finale, because its conclusion didn’t feel sufficiently justified. That being said, BP is one of the better movies I’ve watched in the last two months. 8

King Richard (2021): As a big tennis fan and an Uwe-Boll-level tennis player, I was looking forward to watching this origin story of the Williams sisters. Focusing on their father was a bold move, as I recalled him being a rather controversial figure, the way almost any single-minded person ends up being. Will Smith provides a nuanced performance and writer Zach Baylin manages to anchor the character into a place that avoids too much hagiography, so that was good. Unfortunately, the movie doesn’t justify it’s 2.5 hours runtime, which is why it loses the momentum that might have ensured it overcoming the biopic format. 7

Last Night in Soho (2021): Edgar Wright lets us down from his usual sharp form in this atmospheric, but soulless tribute to the 60s. Starring two of the most popular and appreciated young actresses around, Anya Taylor-Joy and Thomasin McKenzie, the movie is rife with the striking visuals and sweet the tunes Wright is well known for. But the story is unoriginal, just going through the motions and I’d argue it’s not helped by the somber tone it sets for itself. The violent finale will either sway you towards a more positive note (it kinda did me), or lose you for good, so that’s that. 7

Shang-Chi and the Legend of the Ten Rings (2021): I find it funny that Eternals was widely panned, while Shang-got got a lot of acclaim. Sure, the latter is more finely tuned and better balanced, but they felt basically the same to me as far as what they provided – a middling entry in the superherosphere. Shang-Chi might have an edge because it stays focused on fewer characters, but it’s all the moral to and fro that you’ve come to expect from a Marvel origin story. 6

Resident Evil: Welcome to Raccoon City (2021): As detailed in my long-form review, Resident Evil is fundamentally camp when it comes to all the things that make up a cinematic universe. In that spirit, Johannes Roberts gets a lot of things right and offers a glimmer of justice to fans who were appalled by the previous film series. You will always be better off playing the games, but as far as Resident Evil movies go, at least we’re in the right universe. 6