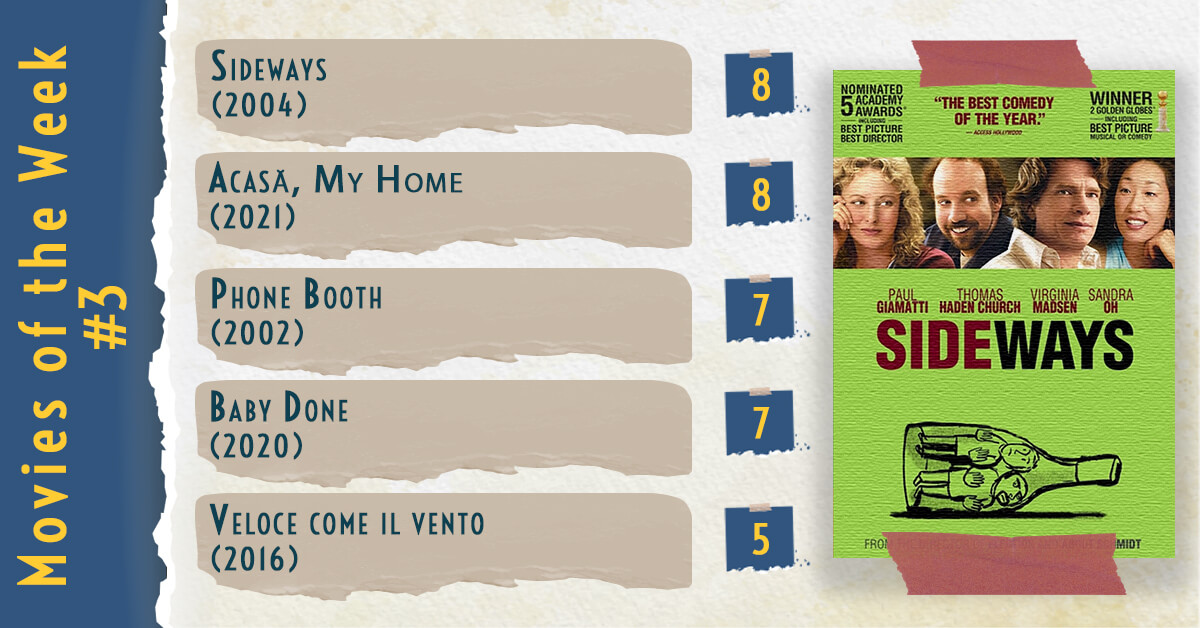 Sideways (2004): This is one of those movies that aged as finely as its subject matter (wine) – or maybe it helps that I’m more of a mid-life crisis age now, as opposed to my teens, when I first saw it. Paul Giamatti plays grumpy, frustrated wine-aficionado Miles, who is tagging along with Thomas Haden Church’s Jack, a plain old playboy looking for a last romp before getting married. The couple are joyously amusing to watch and in spite of being a bit obnoxious, easy to empathize with. It helps that they are well complemented by Sandrah Oh and Virginia Madsen, who play their love interests – and their (lacking) sense of morality. Twenty years ago feels like a really long time, adding a fresh coat of nostalgia and melancholy to what was a good movie to begin with – making it markedly better. 8

Acasa, My Home (2020): A fly-on-the-wall style documentary shot over several years, it follows the Enache family, who we first meet living in an improvised environment at the outskirts of Bucharest. When their home is redefined as a protected habitat, they are relocated in the city by local authorities, and their children are sent to school. It sounds a bit bland, but the sheer contrast of how this family leads its life and the world that we think of as modern proves a very powerful tool. Director Radu Ciorniciuc captures a lot of nuance, even if he doesn’t always drill down into matters as deeply as he could have. The systemic inequities the Enache children face are compounded by the complicated life they lead in the shadow of their patriarch, Gica. A hard story to digest, one that leaves you wondering about everyone’s fate when the movie ends. 8

Phone Booth (2002): This one’s gotta look like an ancient movie to anyone young, doesn’t it? Phone booths are a remnant of the past by now – and they were already showing their age in 2002, when Joel Schumacher directed this exciting, little thriller. It was the year that really introduced Colin Farrell to the mainstream and he does a great job in ensuring PB has a strong pulse. He also does the likable douchebag to a T here, edging the viewer to a redemption-craving place, while the nifty editing eschews some of the obvious drawbacks of telling a (mostly) single location story. It’s gimmicky, yet holds up alright, making for a fun ride. 7

Baby Done (2020): An energic, young Zoe (Rose Matafeo) has her life rocked when she finds out she’s pregnant with long-time partner Tim (Matthew Lewis). Is she ready for motherhood with so many things left to do? How will it impact the relationship? Where does life go on from here? Perennial questions, aren’t they? It’s not that Baby Done offers a unique perspective, but Zoe is a likable lead – thanks to Matafeo’s quirky energy. It would have helped if Tim were more of a character, but even so, the two have what it takes to bring the troubled couple life into your living room – if it isn’t already there. 7

Veloce come il Vento (2016): I’m sorry to say, that I really didn’t like “The Italian Race”, in spite of my desire to do so. It tells of a teenage girl with a passion/talent for racing, who is left in a difficult position when her father passes. The funeral reunites her with a brother troubled by addiction woes and the movie tells his redemption story, as the two team up to win some races and save their childhood home. It already sounds Hallmark-y and while it plays innocently enough, the endless tropes and the shifty race edits just sucked all the joy out of it for me. The upside is that Matilda de Angelis balances Stefano Accorsi’s over the top performance in a satisfactory manner, but not to a degree that would make this movie worth recommending. 5