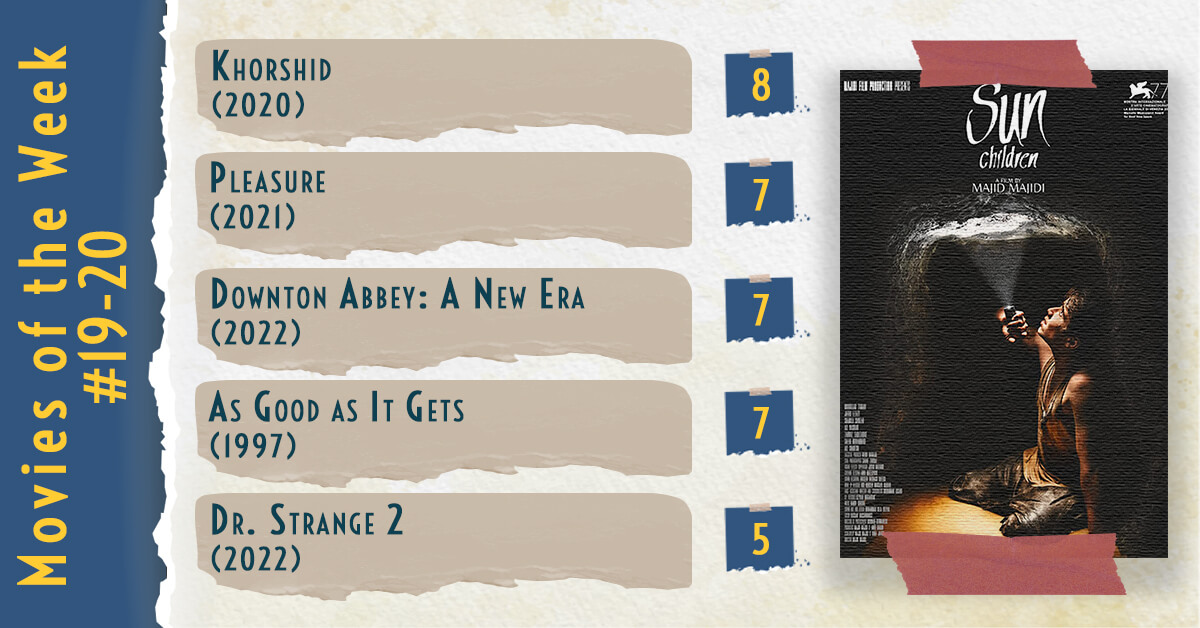 Khorshid (2020): Iran has produced several memorable movies in recent years and Khorshid (aka Sun Children) is a worthy addition to the list. Telling a sad tale of exploitation, wherein young kids have to work and scheme in order to ensure a living, director-writer Majid Majidi finds both the hope and the despair of the situation. While the movie is a bit hallmark-y at times, it works very well thanks to a committed cast and a surprising performance from young Roohollah Zamani, who is endearingly expressive and the perfect emotional conduit for the viewer. 8

Downton Abbey: A New Era (2022): An old-school feel-good movie that’s very adept at following the Downton formula, this latest installment in the cinematic universe is quite satisfying. I’ve discussed my rapport to the series when the first movie came out, so as a bit of a fan it was no trouble to get behind all the going-ons. Strangely enough, the first half of the movie feels like every other scene was cut for size, which means the movie lacks flow and is processional. But once the pieces are all in place, it becomes more cohesive and builds up towards an emotional happy-sad finale. What else can you ask of DA? 7

As Good as It Gets (1997): One of the rare movies to have won the top acting Oscars, but nothing else, AGAIG is a flawed story of a homophobic grinch played by the charismatic Jack Nicholson – so of course, we root for him. It is at times hard to humanize this beastly character, but Nicholson manages to do just that, so well that you are willing to believe he is more of an internet troll, than a despicable human being. Helen Hunt rocks it as well as the over-caring mother of the sickliest of children you’ve ever seen on the big (small) screen, which does elevate a script that’s at best cute and at worst offensive to one of the most recognizable films of the 90s. So all in all, AGAIG works well enough to not crumble completely and to taste like a nostalgia pill for “simpler times”. 7

Doctor Strange in the Multiverse of Madness (2022): The latest Strange is a real letdown. In spite of Sam Raimi’s theatrics behind the camera, the story unfolding in front of it proves simply too messy and contrived to elicit many positive emotions. With a plot held together by a shoestring, unsatisfying cameos and visually spectacular, but tedious fight scenes, not even Benedict Cumberbatch can keep this latest Marvel entry from stinking. And not in a good way. 5