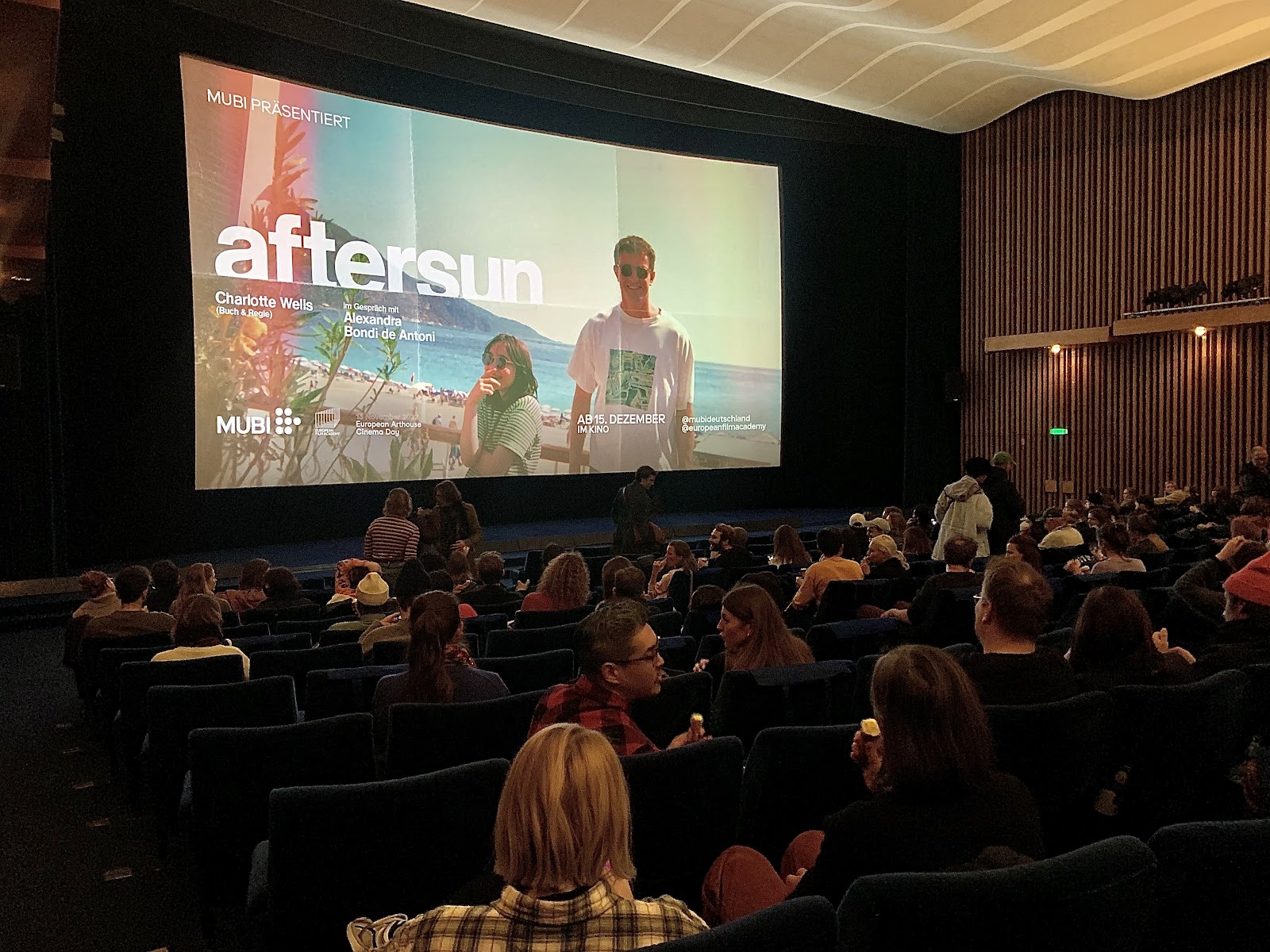 Living in a country that’s not on the beaten path of the mainstream means that my chances of witnessing flashy movie premieres of global hits is an unlikely occurrence. Not that I necessarily want that, but sometimes you just feel like wearing that ABBA t-shirt for a glitzy night out, you know what I mean?

Yoanna was blessed to be at the Berlin premiere of one of this year’s most captivating stories – Aftersun (2022), a movie by Charlotte Wells. Her thoughts on it are here for all of you to read and sensitively articulated to make me jealous.

There’s always something special about film premieres. Especially ones held at a cinema that was meant to host fancy premieres in the German (not so) Democratic Republic. It’s a starry autumn Sunday night and a red carpet is laid before the entrance of the Berlin Kino International, where film director Charlotte Wells is about to hit us with her mesmerizing debut Aftersun. MUBI snapped up the rights to the best reviewed film of this year’s Cannes Film Festival and is letting us experience it before the official cinema and streaming release in about a month from now. Cherry on top, it’s happening in the presence of Wells herself. So here I am, feeling all excited in the gorgeously spacious cinema with its over 500 seats nearly booked out, enjoying my sugar free fritz-kola and impatiently waiting for the film to start rolling.

Inspired by, but not based on, the director’s experiences as the child of young parents, the ’90s-set film stars newcomer Francesca Corio as Sophie, an 11-year-old girl on a package holiday to Turkey with her father Calum, played by Paul Mescal. I’ve been struck by Mescal’s performance on screen ever since I saw him in the mini series Normal People (2020). Here as well, I could hardly imagine a better fit for the role of a father who is happily vacationing together with his daughter, although an overwhelming sadness lurks beneath. Like a slow burn, Calum’s depression inserts itself into the happy memories and Mescal does an excellent job portraying the thick, complex reality of the life of a young father and the responsibility it bears with it in a most authentic and human way.

Much like the video tapes that Calum and Sophie record during their holiday, the whole story goes slowly and easy on the eye — a collection of random memories, ones that strike you as memorable and ones that are there just to fill time, catch the ephemeral. It’s impossible to consume Wells’s film without fondly thinking back of one’s own childhood moments of swimming carelessly at the hotel pool, making new acquaintances with the other guests and sharing some laughs, maybe a first kiss even. What the film masterfully achieves however, is portraying at the same calculated pace the bitter taste of less pleasant memories. Perhaps they are the ones we don’t hold dear to our hearts, but we also cannot simply avoid them, just like tension that builds up between a father and his daughter and results in inevitable outbursts of emotion.

At the end, it’s the processing of these memories altogether – the good, the bad, the hard to explain, the intimate and the delicate – that imprints as flashbacks (well, flashforwards) on Sophie’s adult self throughout the film with great flair. Even though Wells’s work thus functions on more than just one level of storytelling, you feel easily guided through this lovingly told tale that cannot possibly fail to move you intensely.

-Oh, dear… was I that loud? I’m so sorry. Thank you so much! Do you just carry a pack of tissues with you?

-I always come prepared. Don’t worry. I felt the same way. So you liked it?

-Very much! How did you fancy it?